The Outsiders 1983 is one of the rare instances where the transition from fiction to film is successful.  The genesis of this movie was inspired by a librarian - Jo Ellen Misakian at Lone Star Elementary School in Fresno, California.  In 1980 she wrote to Francis Coppola to turn the book into film.  Amazingly Coppola followed her recommendation. 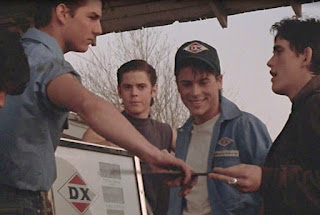 As it was in the 1950s, 1980s and will be in the 2020s youth are often confronted with an economic social caste system of culture and labels. As they adapt to 'modern' culture they often create their own counter culture to deal with it.  The 1950s Greaser is the grandaddy of all subsequent anti-establishment youth movement counterbeats before the Goth, Emo, Skater, Punk Rocker, Metal Head, Slim Shady, Hoodie, and Trenchcoat Mafia cliques.

The emblem of DX gasoline was originally an independent company that operated out of Oklahoma but merged with Sunoco in 1968.  Here Rob Lowe and Tom Cruise work as gas station attendants. 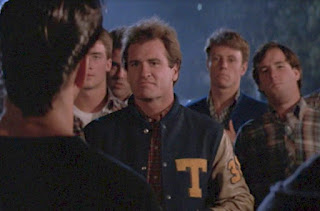 The film stars an ensemble of actors who became a would be male version of the Pleadies upon the imaginations of the world as it starred Tom Cruise, Emillio Esteves, Ralph Machio, Mat Dillion, Patrick Swayze, Rob Lowe, and Christopher Howell.


No flags of note appear in this film but several vexilloid related items made a cameo.  Namely the high school letter-man jacket of livery and unintended streamers of disuse and mischief. 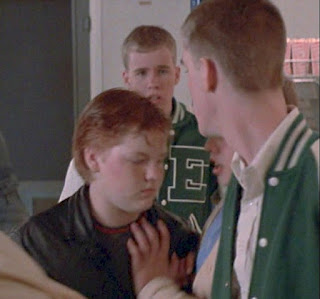 Two high school letter-man jackets appear, during the concession at the drive-in and at the rumble between the Greasers and Socs.  The colours - or livery-  of the 'Socs' at the drive-in is green and white.

The livery of the Alpha Soc before the rumble is blue and yellow.  Although lead Greaser Darryl used to play football with his football buddy, the rift in culture and socioeconomic status is wide. 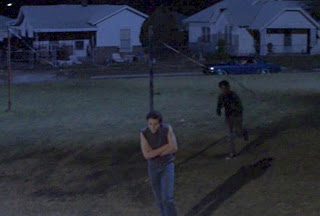 Ponyboy and Johnny take refuge at a playground, what seems to be the worn ends of a volleyball net sway from a pole like a streamer.  This is a vexilloid-streamer of accidental-natural genesis.  But like any other flag or vexilloid it conveys a message.   In this case it signals 'neglect' or 'disrepair.' Likewise Ponyboy and Johnny are boys who are neglected by their parents. 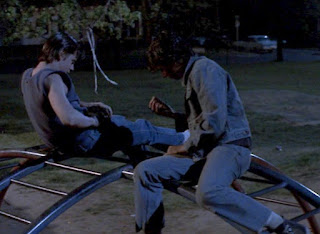 Finally when Ponyboy and Johnny are on the monkey bars a lone streamer of toilet paper can be seen hanging from a tree branch.  TP on tree is a vexilloid-streamer created out of vandalism, humor, or as a silly prank.