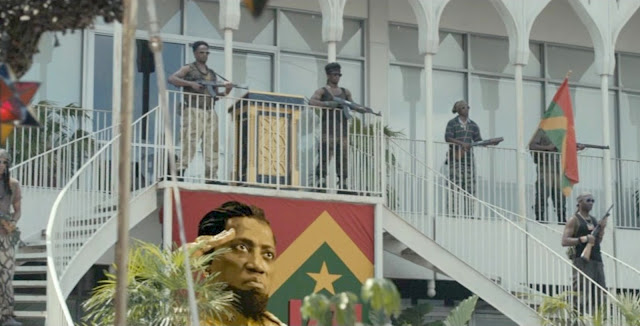 The flag of Nexdoria uses the Pan-African colors red, yellow, and green.  There is yellow chevron that separates an upper red field and lower green field.  A yellow star is near the top of the green triangle. 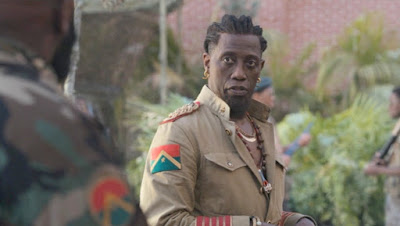 Posted by Maddish at 6:29 PM No comments: 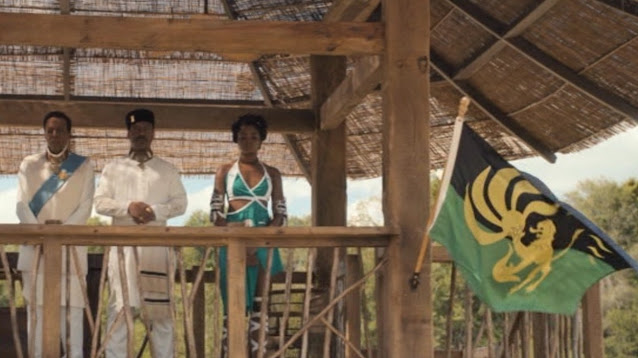 The flag of Zamunda is horizontal bicolour, black on top, green below.  The icon in the center is the outline a lion either holding a weapon or some sort of flower, or maybe its the sun. 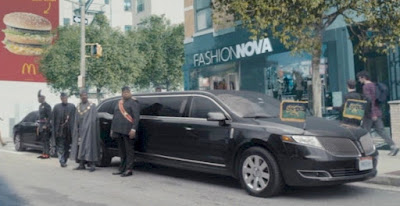 Attention to detail for this sequel was paramount.  When Eddie returns to America for the 2nd time, his limousine is decked out with gold fringed car flags. 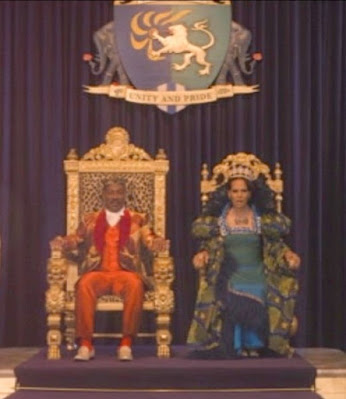 The coat of arms for Zamunda are slightly different compared to the flag.  The shield is divided vertically instead and the colors are blue and green instead of black and green.

Posted by Maddish at 6:18 PM No comments: 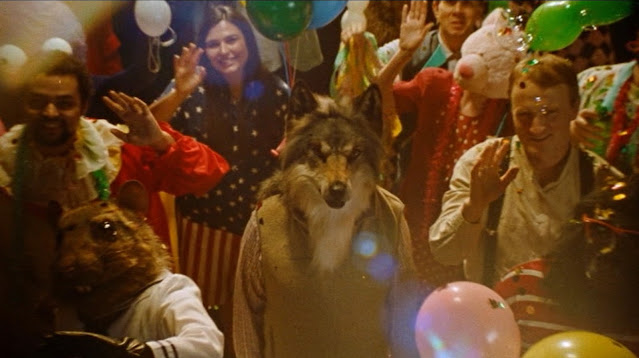 Strawberry Mansion is the new cult sleeper classic for the 20s.  There are movies made every so often that are artful and fun.  This movies taps that market for the mind expanding movies made on basic budget that is swarmed with tender love in care.  Something magical with a solid artistic heart the Coraline 2009, yet surreal like Altered States 1980. 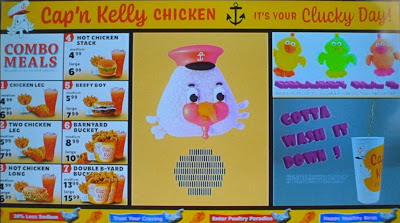 Of flags in the movie, during the ordering scene during the Cap'n Kelly Chicken board, chickens along the bottom can be seen walking towards the right with banners attached to their tail feathers.  One of the banners read "Trust Your Cravings." 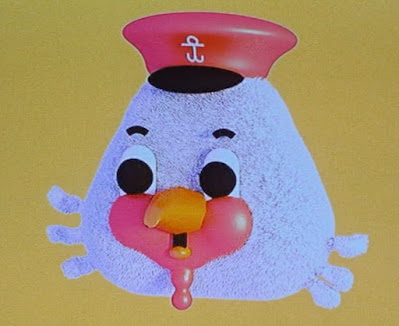 The decal on the hat of the disembodied customer service Cap'n Kelly Chicken has with a uniquely drawn anchor, which effectively represents their brand.

Strawberry Mansion is a movie of the Naked Lunch variety, but its set design and art direction are hypnotically stunning, worthy of an academy award.  It is truly a work of art, that tells a fun story with a message, without the giving one a beating on the head, unlike the mainstream political jackhammer of tinsel town.

Tired of the Hollywood schlock?  Give this movie a try, it's a dreamy trip made with heart on dime.

Posted by Maddish at 8:52 PM No comments: 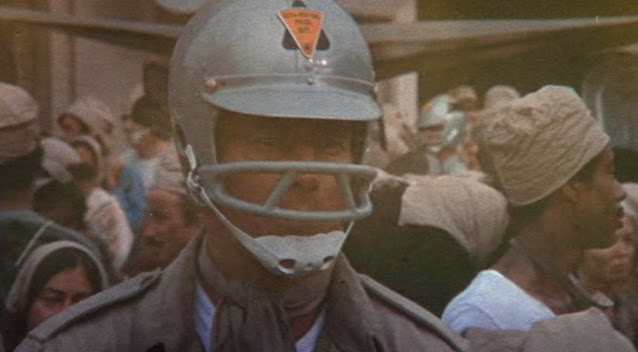 Soylent Green was movie from 1973 that predicted the state of the world in 2022.  It got a few things right, like people wearing masks.  But in this movie the environmental disaster was resulted in the 2022, which makes food very scarce.  Consequently a quirky twist has resulted. 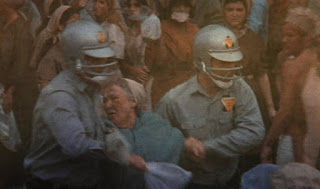 The police in Soylent Green wear silver colored helmets and the special star badge on the center of the helmet.  The back triangle is black and pointing upwards, while the front triangle is yellow and is pointing downwards. 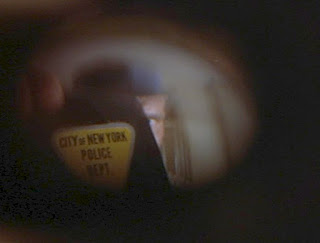 Upon the yellow badge it is written CITY of NEW YORK POLICE DEPT.

A unique vexillological item in Soylent Green, set in a dystopian year of 2022, appears on the waste management vehicle.  As it was a rather low budget sci-fi movie, they just printed a design a slapped over the would have been official logo of the trash truck.

One flag appears in the opening montage.  It looks like a pennant, that is impossible to discern.  It is jack of some sort; a jack is special type of flag flown at the front or bow of a ship.

The movies predicted the band Green Day would still be popular in the year 2022.  Just Amazing! Green Day needs to make a song called "Soylent Tuesday!"

Somebody in 1973 must have been tripping on future somethings, because they hit the target that in 2022, people would wear masks.  But we don't all wear the same kind of drab clothes. 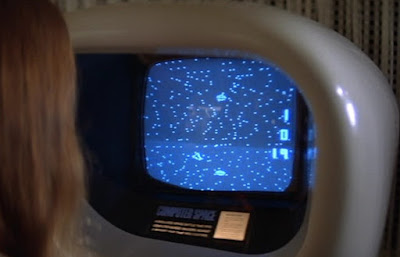 The cool retro games of 1973! Apparently the rich man who had this in his apartment was video game collector, who could afford such a retro game in perfect condition. 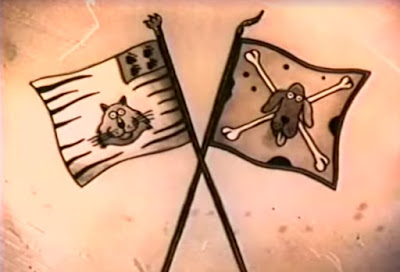 Gary Larson had a short-lived animated show.  Larson is famous for the juxtaposition of ideas to make people laugh at the way things are.  In this case the army of cats and dogs fought each other.  Note that the cats have a flag somewhat similar to the Union, while the dogs have Confederate kind of flag, but instead of stars on bars, it is crossed bones.

Posted by Maddish at 6:30 PM No comments: 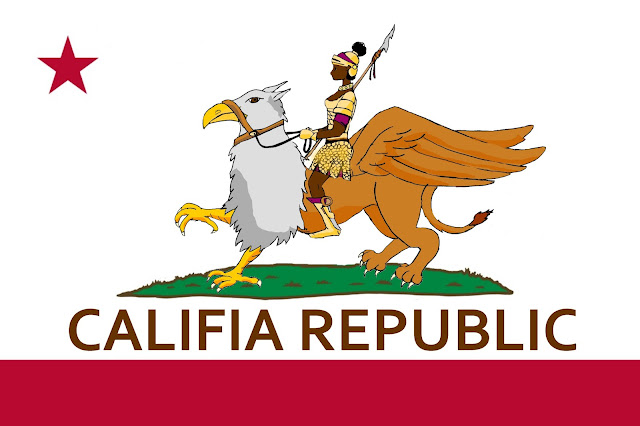 Queen Califa was the first legendary namesake who gave California its name, according to Spanish storytellers.

Posted by Maddish at 6:38 PM No comments: