Flags in Harold and Kumar go to White Castle 2004

Harold and Kumar by US Flag in White Castle 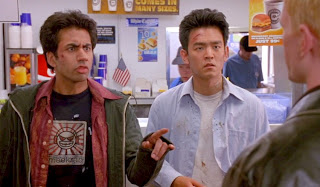 
The coincidence is that Cheech and Chong are somewhat analogous to Harold and Kumar. Cheech is a mix of Indian and Chong is mix of Asian. Likewise Harold is Asian while Kumar is Indian.

Cheech and Chong were a comedic duo of a 1/2 Asian person with a 1/2 Indian person who were both glued together by a common 1/2 Caucasian heritage. Just in case you forgot, people of Mexican identity are generally a mix of Caucasian and Native Indian. Also Chong was a 50/50 mix of Chinese and Fine Canadian White.

But Harold and Kumar are full blooded - Asian and Indian. The funny thing is that Europeans thought they were in India thus the name stuck with the aboriginals of America, however most Native Americans look more East Asian than India Indian.

To complicate matters further, the term Asian in the US is warped to signify East Asian people only. Officials and the media overlook that India, Israel, and Arabia are also a part of Asia. What this means is that New York has a higher percentage of Asians than what's normally considered Asian when you factor Middle Eastern, Israeli and India people into the ratio.

Confused? Basically you're average American Joe (Asian or not) usually considers people of only of Mongoloid features to be Asian, but Asia is bigger than that. Suffice to say that most of the people in the Torah, Bible, and Koran were Asian.

Announcement flag on poster
pennant in the background 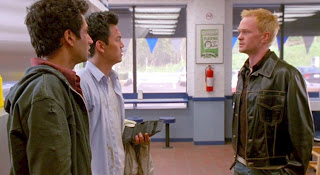 There is a green and white commercial ad flag on the wall above the fire extinguisher. You can also see the livery of White Castle - which is blue and white, via the pennants. Also Neil Patrick Harris plays himself as a famous person who runs into 'regular folk.' 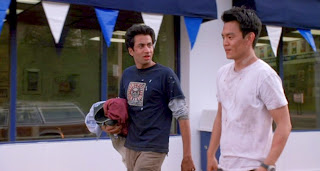