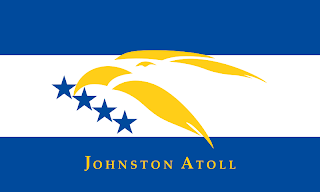 It is a horizontal tri-bar - from the top its blue, white in the middle, then blue along the bottom. In the central white part are four blue stars that represent the islands Akau, Hikina, Sand, and Johnston Island. The yellow portion has the outline of 'double' bird with its beak next to the top stars facing the hoist. Accidentally the yellow portion can be perceived as a two bamboo shoots bending in the wind facing towards the fly.

Johnston Island was formerly a semi-top secret hi-tech space age weapons testing facility with the capacity to destroy a continent. But now its been 'cleaned up' and turned into a peaceful national wild life refuge - returning to its natural state as a bird turd island.

Johnston Atoll is on par on the latitude of with Guadeloupe in the Caribbean and Da Nang, making Johnston Atoll just south of the old Vietnamese DMZ. With respect to the American Hemisphere it is parallel to Roatan Island, Honduras which is due south of Nashville, Tennessee.