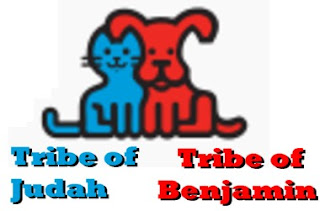 In the modern world, the Twelve Tribes of Israel are attached to certain emblems. Nearly every tribe has more than one emblem, and the origins are somewhat of a mystery. Nonetheless, a harmonious duality is apparent. The foremost example being between the Tribe of Judah and the Tribe of Benjamin.

Of the twelve tribes, Judah's Lion and Benjamin's Wolf are the most consistent. They are fraternal emblems in the universal sense of the canine and feline, or rather as the rivalry between cats and dogs. 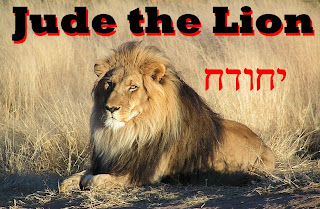 Dog is considered man's best friend, but when it comes to respect and power man could be considered the king of the cats wannabe best friend. Basically man is a fanboy to the King of the Kitties. But the lion in its natural wild state seems to see man as a nuisance or dinner. Nonetheless the size, strength and power of the lion has perpetually enchanted man. Nations all over the world use the King of Kitties in their national seals and flags. Dog may be man's best friend but man would rather be the best friend to the King of Kitties - aka the lion.

Can dogs be found on flags or heraldic emblems? Or even wolves the most ferocious of canines for the matter? Imagine a King Richard the "Wolf-heart?" Didn't think so. 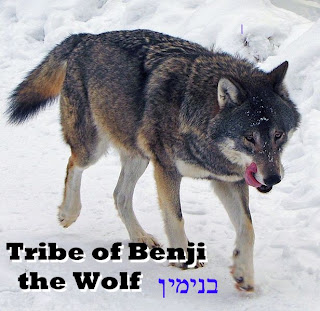 Ben and Jude also align by direction, the Lion of Judah is associated with the east incidentally partners up with a 'western' tribe of Benjamin. Just in case you forgot, the tribes of Israel were supposed to camp on the certain sides of the ark during their march into the promised land. Since then in mystical kabala-baba talk, these directions have new age kind connotations.

Finally the pairing of totems of the Lion and Wolf occurs between brothers from different mothers who were also rival sisters. The Tribe of the Lion originated out of Leah, while the Tribe of the Wolf came from Rachel. Although sisters, they were fated to compete for their mutual husband's love who seeded the Twelve Tribes of Israel from four wives.

The 'states' of Benjamin and Judah also had geographic significance since their territories were divided right through the city of Jerusalem.