Enter the Year of the Dragon... 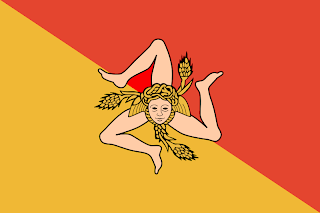 Although they are a world away they sit at the nexus or rift between two realms of reality. Sicily is nestled between Africa and Europe while Bhutan teeters between India and China. Both nations are elements of their neighboring worlds, both with slightly northern tilts. Sicily is closer in a cultural orbit to Europe while Bhutan feels a stronger gravity with China. 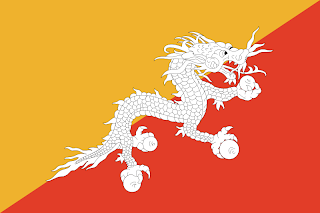 Mystical animals often considered monsters are charged on their center. The mighty and strong dragon sits proudly on Bhutan, while Sicily has the most famous of all Gorgons - Medusa. The dragon is balanced on three balls, while Medusa's head rests on three legs.

They are union of East and West, for their ancient names are one in the same. The ancients called our world 'Middle Earth' with good reason. It was assumed to be in between heaven and hell. Likewise when you literally translate China and Mediterranean in to English it becomes one in the same 'Middle Earth.' 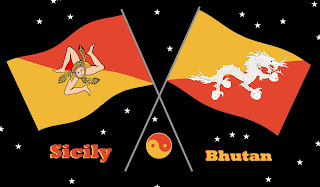