Raiders of the Lost Ark, part 5 - the Nazi Flag

Indiana Jones being rescued by a Nazi Flag? 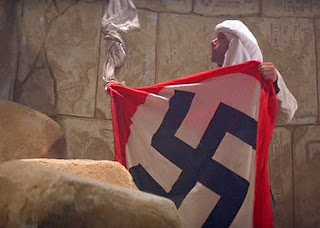 Raiders of the Lost 1981 was an epic movie that enshrined some of the best elements of American Cinema. The hero of the story is an Archaeologist who has the amazing ability to over come the odds with wit and grit - Dr. Indiana Jones played by Harrison Ford.

The time frame of Raiders of the Lost Ark is set in the late 1930s during rise of the Third Reich. In this scene Indiana Jones is dressed as an Arab in order to infiltrate an Egyptian map room. His partner - Sallah - was supposed to use a regular rope to rescue him back out, but it was confiscated. Since Sallah didn't have access to a proper rope, Sallah rescues Indiana Jones with a makeshift rope made partly from a Nazi Flag.

In this scene Indiana Jones has taken on the dress of a German Military Officer in order to infiltrate the secret military base. His objectives are to recover the Lost Ark and rescue his true love - Marion.

The Nazi Flag is considered an inflammatory symbol and banned by various communities. However in the context of Raiders of the Lost Ark, it became a not so offensive yet essential movie set prop.
Posted by Maddish at 12:00 PM