Flags from Titanic film from 1997 by James Cameroon 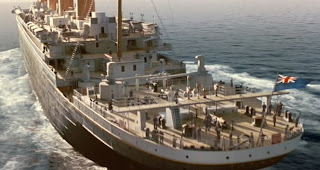 The HMS Titanic was a part of the the White Star Line and nationally flagged under the United Kingdom, 100 years ago. It flew the British Blue Ensign at is stern as it was accurately depicted in the film.

The most recent and grand retelling of this tragic story was told by James Cameroon in 1997. Its ground breaking special effects, top notch directing and stellar acting led it eleven academy awards. 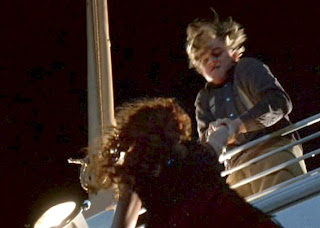 1912 was a tragic bitter sweet year for the world and technology. Once again in 2012 we stand at a great precipice of change, technology, and society. No matter what, there will always be Jacks and Roses who choose to stare down the unknown and fear, in order to follow the dreams of their heart, as did the director of the film.

Don't let go, if you fall I'll fall with you