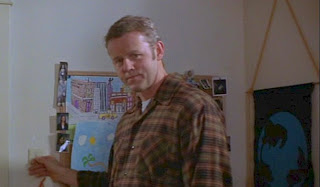 In the film Contact (1997) we see the origins of Dr. Elanor "Ellie" Arroway's fascination with the heavens. In her room the banner of the earth hangs in her corner held up by a yellow rope.

Ellie becomes facinated that there are other planets out there and that some stars were not actually stars but worlds with different kinds of skies and moons.

She is old enough to think like an adult yet young enough to let her imagination soar. Soar indeed, it leads her to ponder the question is their anyone else out there in the heavens like us? When she asks her father he replies, "If it is just us, it seems like an awful waste of space." Likewise if there is no meaning to life it'd be an awful waste of time.

Ellie is in this scene is at that magical age of youthful wonder with an adult sense of knowing.