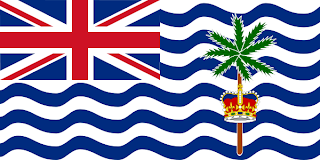 The flag of British Indian Ocean Territory seems to be in a league of its own. This crumb of 'India' is last the remnant of the forlorn British Indian and African Empire. It is a tiny group of Islands located in the virtual middle between Asia, Africa, and Australia.

Its more popular name is Diego Garcia. And it is a strategic post for the US Military with the War on Terror.

The flag is a rare British Ensign design that does not conform to the typical red, blue, or white field. Rather the field consists of wavy stripes - three long blue and three short blue. Bordered by seven white wavy stripes - two long, two short, one long - missing half its bottom, one long that that is 3/4ths complete and finally one short 1/2 that is missing its top. In total there are thirteen blue and white wavy stripes that are reflective of the Indian Ocean. The charge on the field consists of a British Royal Crown and a eight branched palm tree. 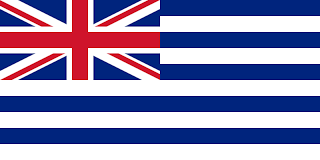 Its unique design would indicate it probably wouldn't have a fraternal partner, but alas it does. Its partner is outside of the official 'now' but nonetheless is congruent with the flag of the Mosquito Coast.

The design of the Mosquito Coast has nine stripes - five blue and four white. There is no charge on the field of stripes. 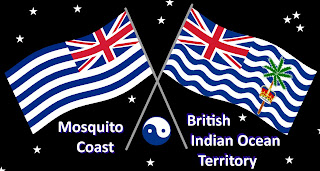 US Military Welcome Video about BIOT or Diego Garcia