Flag of the Bounty Islands 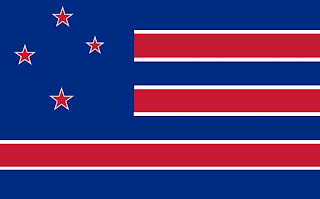 Not to be confused with Bounty Island, the Bounty Islands belong to New Zealand and consist of 13 main islets in the South Pacific.

These islands are also antipodes to Europe, at Boulle-Mernard France. Another coincidence is that these islands were discovered the same year the United States become a legal nation under the Constitution in 1788. Thus the flag of the Bounty Island flag bears some resemblance to their up and over cousins to the north. The US Government is the same age as these thirteen magically shaped isles.
Posted by Maddish at 2:14 PM