Mini Hotel Flag - A Beautiful Day in the Neighborhood 2019 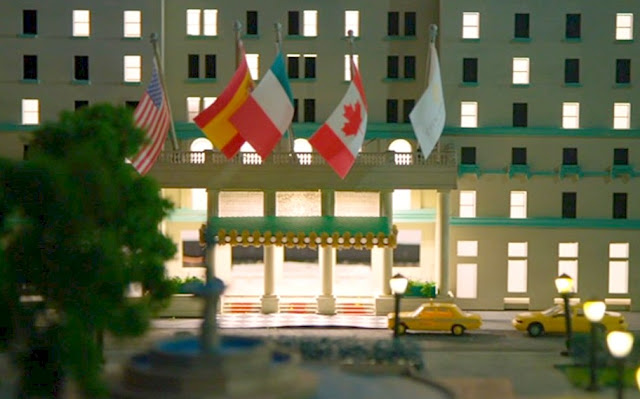 Mr. Rogers is an iconic personality from American childhood.  Somewhat of a preschool-kindergarten kind of teacher.  His sincere, Plain Cain, simple demure was something a breath of fresh air in a noisy, clownish cacophony of broadcast television.   Rather than lusting after the audiences dollars and cents, Roger's was selling free, wholesome advice for a better life. 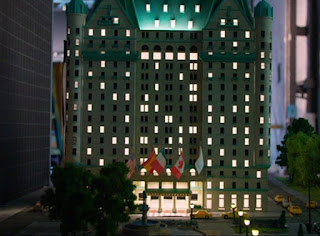 Hollywood released a film dedicated to his spirit in 2019 entitled A Beautiful Day in the Neighborhood, starring Tom Hanks as Fred Rogers.  Perhaps the opposite of Mr. Rogers is Mr. Herman, Pee Wee?  Pee Wee was less the education and more of the Pop-corn style.  It is too bad that Mr. Roger's wasn't a guest on Pee Wee's show, or vice versa.

In the film the mini flag of the USA, Spain, Italy (Mexico?), and Canada appear in one of the transition sequences.  A white hotel flag with corporate logo is also visible, but it impossible to discern from the video. 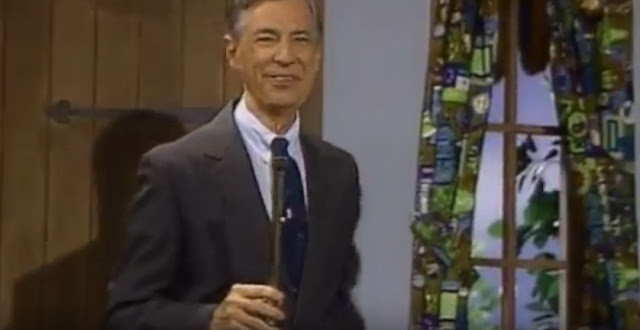 Mr. Rodger's is an American classic from Pennsylvania.  His calm, low key delivery of infotainment made its deepest impact on Generations X, Y, and Z.  Usually media is over the top and off the wall to gain the 'consumers' attention, with witty humour and wacky special effects, like jingling keys.

However, Rodger's put the jingling keys away and spoke directly, unafraid of that oh so precious silent space.  Most people growing up in American learn to hate the quiet, and find it necessary to fill the void with talk or jokes.

In a way, many have this backwards as the quiet is good.  Most people don't have any idea the importance of quiet in the mind.  And when you share the quiet with another person or stranger, it is good.  If you are uncomfortable with the 'awkward silence' — that is your ego, that judgemental inner voice that dislikes the silence.  In fact, the ego hates silence and will often negatively blame and judge the other person or yourself for that 'painful' silence.  'Awkward Silences' are sign that you ego is out of control, and you need to learn to control better manage its constant noise and often negative judgements. 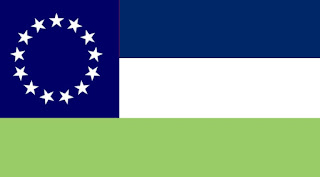 Of vexillological note were the curtains along Mr. Roger's windows upon his set.  They changed throughout the seasons, but every so often the patterns of flag were visible.

The style of curtains was stark contrast to Mr. Roger's style.  They were often loud, brash, and zany patterns that were of young boy's room, of that 1950s Americana. One flag was similar to the American flag but had three stripes of green, blue, and white. 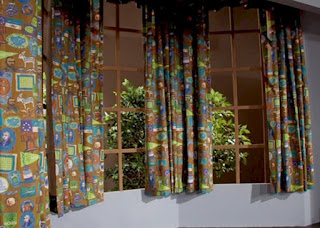 In 2019's A Beautiful Day in the Neighborhood, starring Tom Hanks, a near perfect match of curtains can be found.  However the hone flag looks is visible, which is difficult to make out.  It has a hoist-canton with seven stars.  The most popular US flag to have seven stars within it was the original flag of the Confederacy when it was originally made up of 7 rebel states.  On the curtains in the movie it looks like a date is written in the lower field and something in the upper blue field.  Perhaps it reads Civil War and 1861? 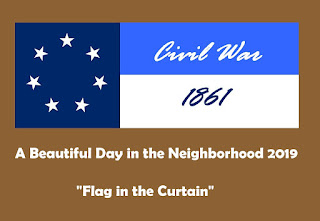 There was also a green pennant with a blue vertical pattern near the hoist with writing on the flag.   Note before anger management became real therapy, Mr. Rogers tackled this problem head on. 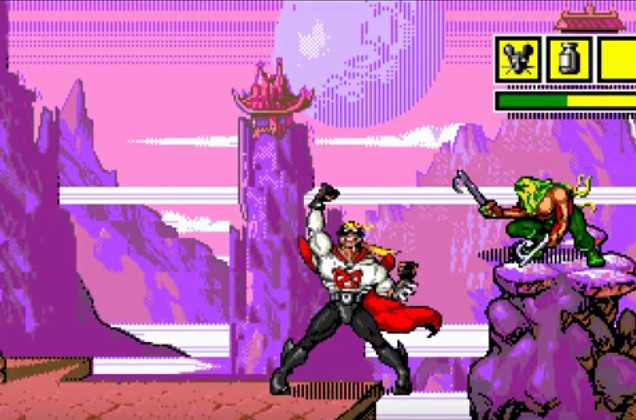 Comix Zone oozes with the spirit of the 1990s.  Typically, media and art made at the midpoint of a decade (example 1995-1996) sets the gold standard for the spirit of the decade.  1990 is too much like the 80s and 1999 is too much like the mighty Ohs.  Comix Zone is a key note from the SEGA™ Genesis lineup. The music, the outfit of our hero, and style sings of the 1990s grunge movement. 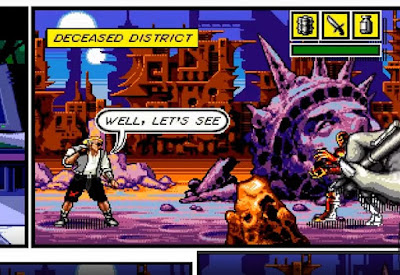 1995 was when video games were offline, not-monitored, and gamers could trade, sell, or lend their truely private property of a game to their friends without interference or observation from Big Sister™.    Power ups were simple and achievements were personal, instead of being a public document for the various Videogamer-Corps™. 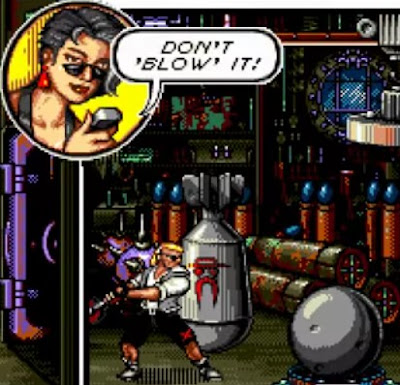 Of vexillological note, when the protagonist of the story, Sketch Turner, gets his superhero power up, a unique logo appears on his chest: it is a red semi-circle with an ×, that appears on a white shirt.   The livery of our superhero is white,
black, and red.  He has black tights with boots, a white shirt, and a red cape.  Turner also dons sunglasses and is able to blast all baddies on the screen, with a comic zap.

When Turner is in normal mode, he is a Kung Fu master of the 1990s sort.  The pants and haircut are of the Niffertastic Nineties™.

The bad guy logo also appears on the bombs in some of the abandoned ships.   It is red painted face outline of a man with hat, sunglasses, and long mustache.

Comix Zone is one of the few original masterpieces with original content, rather than being an established pop-icon or a spinoff of some other established property, like the Amazing Man Spider, Mr. Bat Ma'am, or the X-Them. 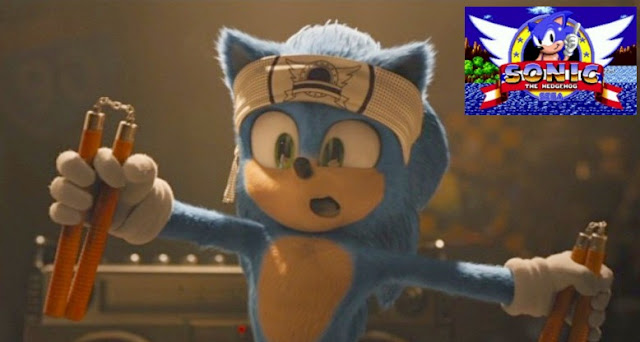 Sonic the Hedgehog was family friendly, nostalgic wonder spark.  Most movies based on video games flop.  Typically the fans and Hollywood directors are out of sync.  But finally in 2020, the directors got it right. 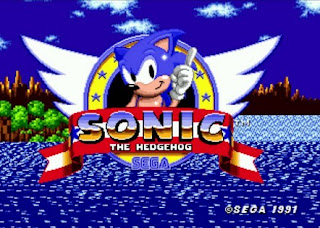 Finally 1990s get some respect, as a separate decade from the semi-tacky 1980s.  Reason being, the first Sonic video game was released in 1991.  Likewise, the star of this movie Jim Carey was able to soar to top shelf of comic spirits.  Although the movie was set in modern times, 2020, Sonic and Carey are class clowns from the 1990s that took up a big chunk of people free time, and made a momentous comeback in 2020. 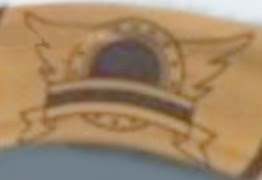 Of vexillological note is the headband that Sonic wears in the movie.  The logo design is modified black and white pattern based upon the intro screen from his first game, back in 1991.

Sonic the Hedgehog is of the original Platformer—basically a jump and run to side action game.  These type of games are continually remade each generation.  The basic plan of the game is to run to a goal, via an obstacle course, using the simple rules of gravity, power ups, and of course timing the right time jump at the right moment. 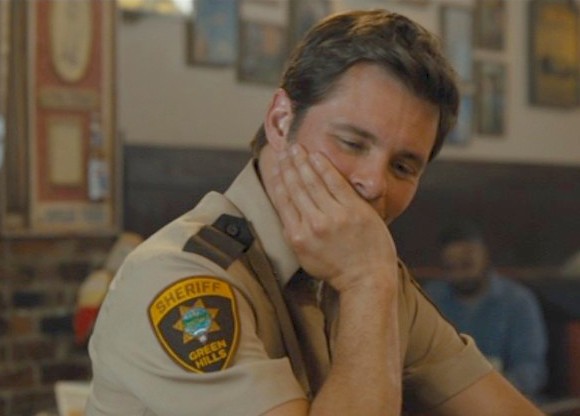 Green Hills was originally the round of levels, where we Sonic came into existence back in 1991.  Thirty years since conception, this flagship character from SEGA was live on with a hit movie: Sonic the Hedgehog 2020.

During a credit scene, a welcome sign to Green Hills can be seen, in glorious 16-bit 1990s video glory.

Posted by Maddish at 8:43 PM No comments: 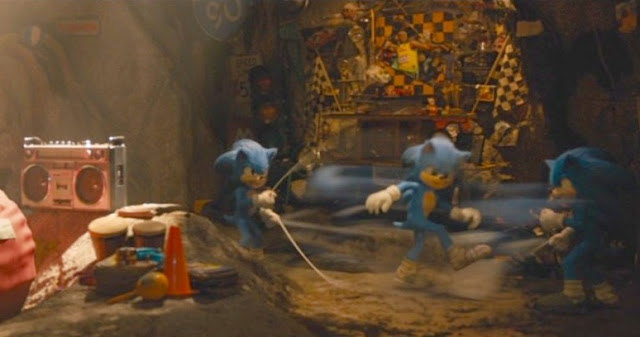 The checker pattern is associated with Sonic the Hedgehog, as this pattern can be found all throughout the game.  In the 2020 Sonic the Hedgehog film, several real life checker flags could bee seen is several scenes.  In his burrow underground, Sonic has an kind of altar of checker flags, that can be seen in a montage, when we see what his daily life is like.

When Sonic is in the bar, he grabs a pennant streamer that just happens to have checker designs.  The image has been flipped to 'right side up.'  Thus the people in the bar look normal and Sonic zooming around the bar is running on the ceiling. 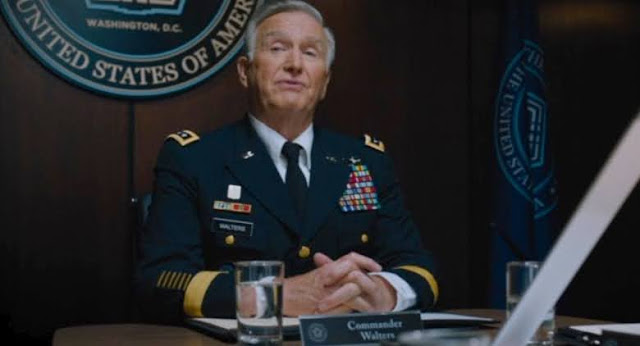 In 2020 Sonic the Hedgehog movie, an original and imaginative flag for the US Pentagon appears during the meeting of generals.  The design of the flag does not match to the official seal in our universe, but in this alternate sector of the Multiverse it is the official flag. 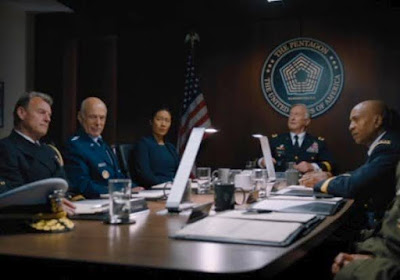 The Sonic Pentagon flag is on a field of navy blue with the colours of yellow and neon blue.  Neon blue makes up the rings and outer dimensions of the Pentagon shape, while the yellow hash marks fill in the Pentagon in four levels with broken spaces at the mid-points of the flag. In the outer ring it is written THE PENTAGON *** THE UNITED STATES OF AMERICA ***—the US flag is also visible on the left side of the seal on the wall.