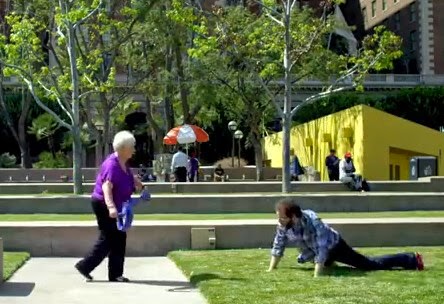 Sarah Bareilles keeps it real in her video Brave.  Singing from her heart, Bareilles lets out positive vibes wherever they may be found - in a park, a mall, gym or at the library.

Here a flag can be seen in the upper background above the yellow building.  It is impossible to make out exactly what it represents but it can be seen gently waving in the wind. 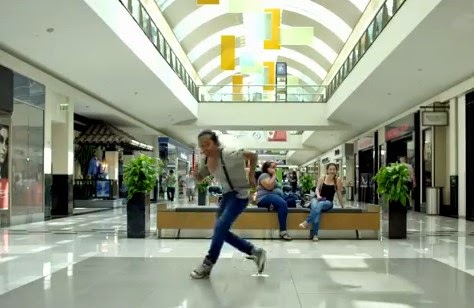 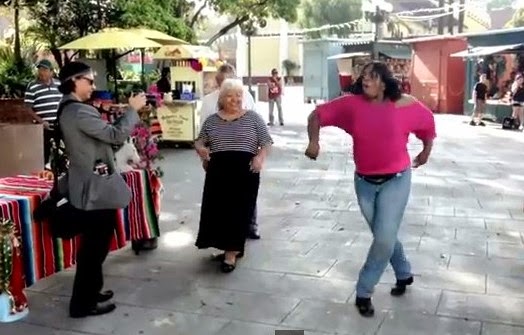 Here a man is dancing almost with spontaneity. On the ceiling are several banners of yellow that are impossible to make out.  But yet again a mundane place has become the center point of happy feet.


Here a woman lets it loose at what looks like a South American outdoor shopping center.  Streamer triangle banner flags can be seen in the background, again it is impossible to make out the specific details of the flags.

Bottom line is when a happy spark of love or dance taps your shoulder, you should engage it!  People are so apt to engage the complaining spirit, next time feel free to be brave by pushing up an on the dance vibe whenever or wherever you feel it be it at a mall, park, or wherever.

Posted by Maddish at 1:23 PM No comments:

During the boxing match several unique flags make an appearance.  The flags are simple white swallowtail designs with the word "FIGHT!" written upon it in various colours that include black, yellow, and red. 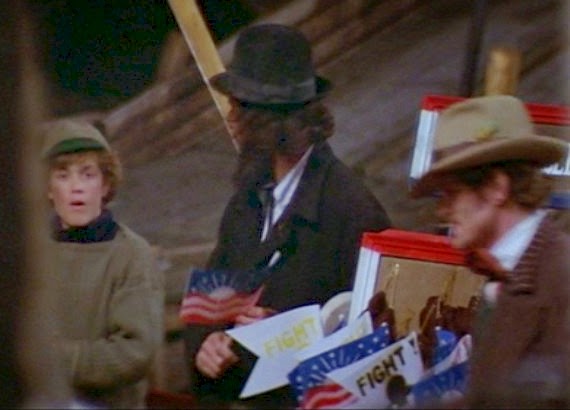 Here the "FIGHT!" flags can be seen next to the national flag of Sweethaven.

Posted by Maddish at 8:58 AM No comments:

The movie Popeye is a flag rich film.  The makers put a lot of effort to make unique flags.  During the scene at the race track painted black flags on the background wall can be seen. 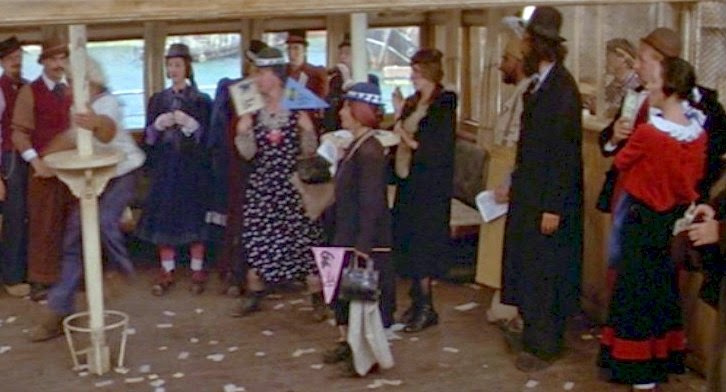 You can see several women holding flags with the various numbers of the horses on them.  One flag is pink while another is sky blue. 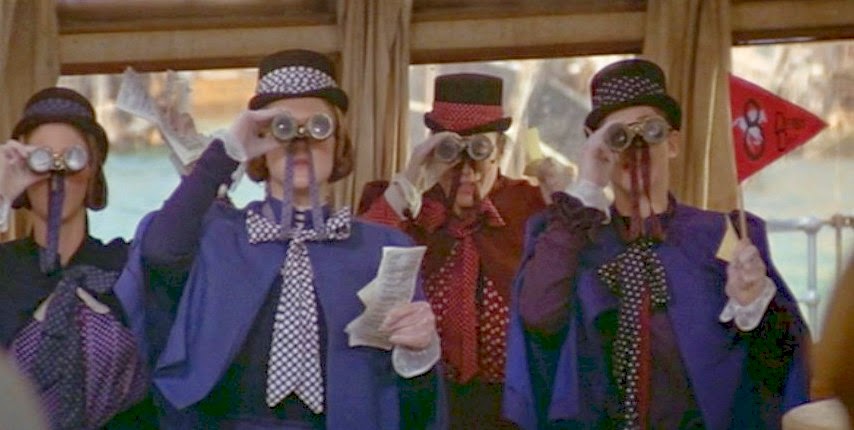 The woman on the right is holding a red pennant for horse number 8 in her left hand.  Although they are using binoculars the horses are actually very close and mechanically controlled. 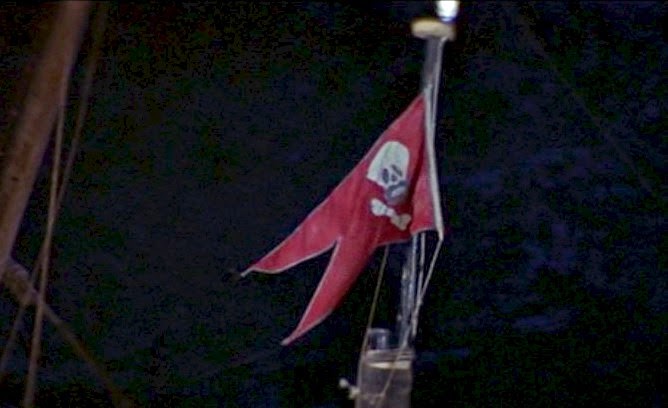 Bluto's flag is a swallowtail flag with a red field.  It has white jolly roger with a bearded skull.

Posted by Maddish at 8:53 AM No comments:

The flag of Sweethaven is similar to the United States but with Kiribati twist. 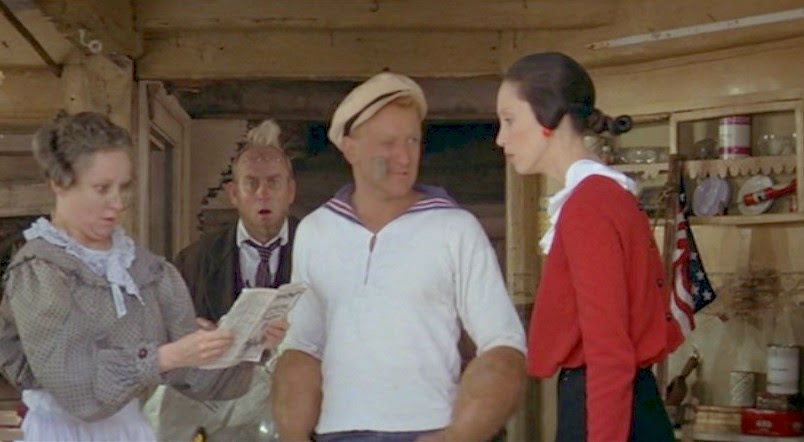 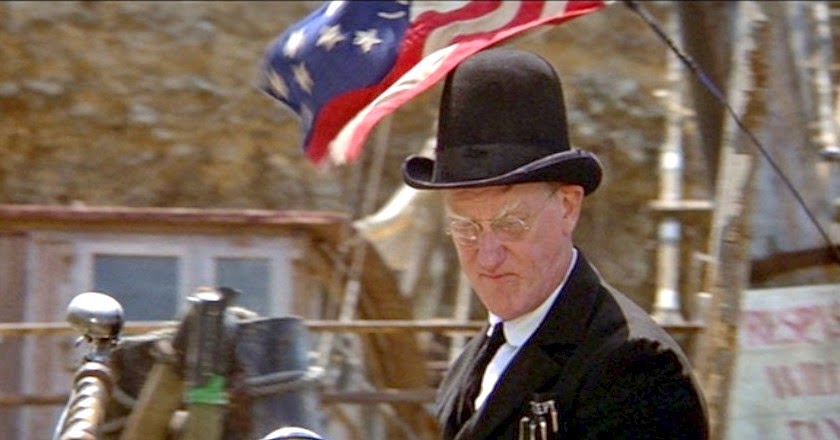 Posted by Maddish at 8:50 AM No comments: 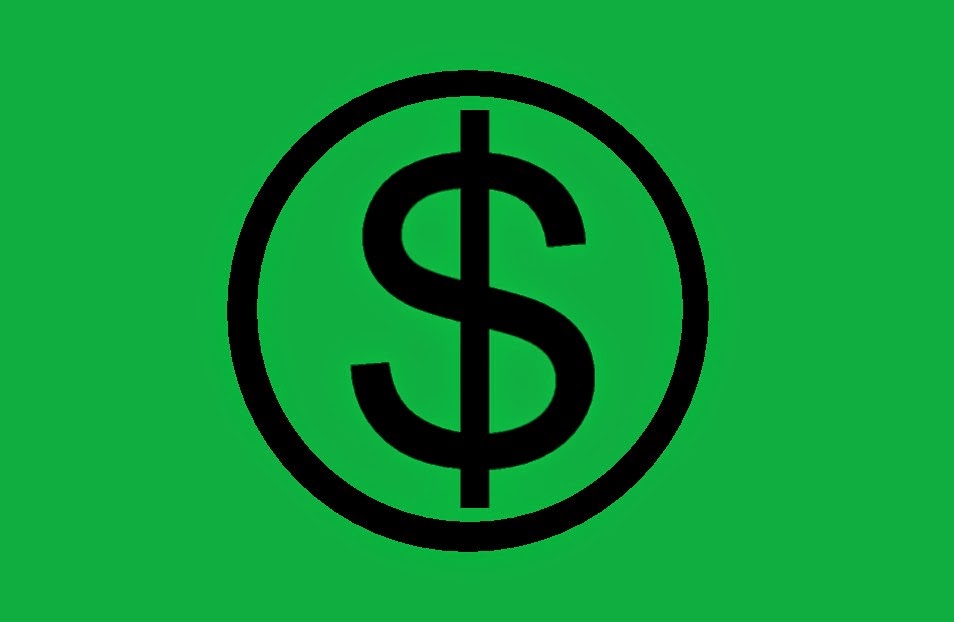 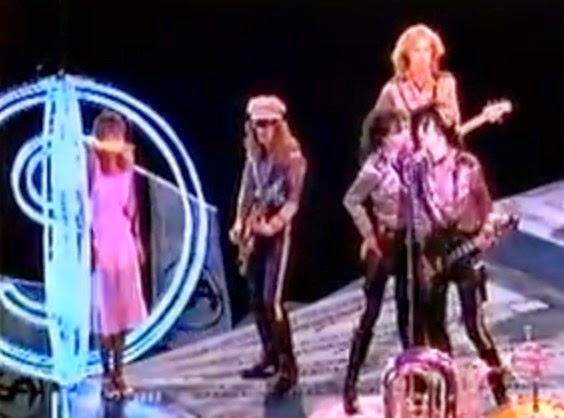 In the 1978 the Sgt. Pepper's Lonely Club Heart Band film was released starring The Bee Gees. It was made in the cosmic wake created by Star Wars mashing up with the spirit of the 1970s with the Beatles.  It was funky a film to say the least.

Several flags appear in the movie but the most original appears during Aerosmith's rendition of Come Together.  The flag is a dollar sign in circle on a background of money green. 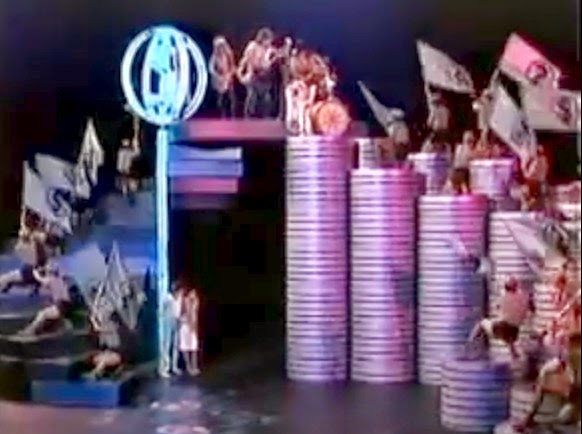 The money flag represents greed on a harmful selfish level.  The choice of greed versus love and joy is a theme debated in the film.

There is a fine line between joyful abundance and self serving greed.  Certainly it is possible to become rich without being mean, cruel, wicked, heartless or paying people a sub-human minimum wage.

Posted by Maddish at 5:48 PM No comments:

Flag from the movie Divergent 2014 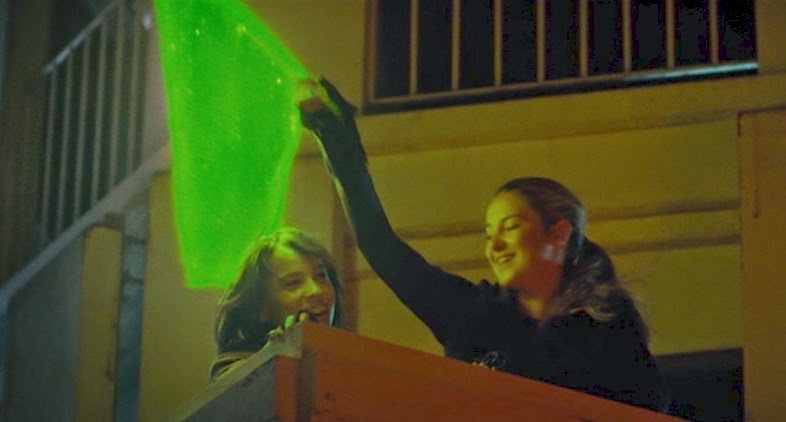 In the movie Divergent 2014 several unique flags appear.  Since the movie takes place in the future these are not normal flags, but are made of a type of luminescent fabric that makes them glow.  The film is based upon the Divergent Trilogy. 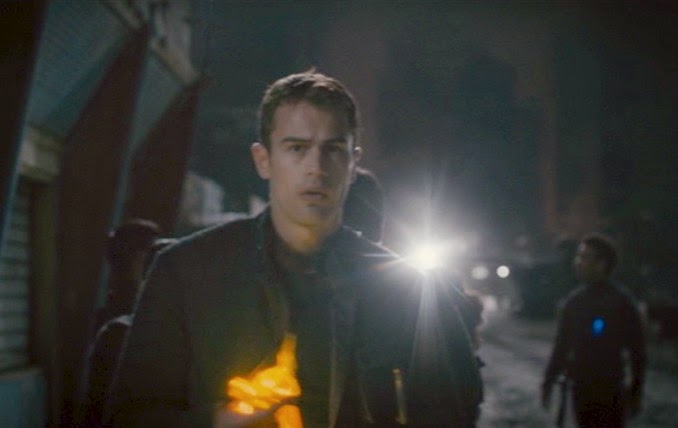 Here is a close up of the orange team's flag. Certainly in the future, flags will be of this nature will be made.

Posted by Maddish at 9:47 AM No comments:

Flags in Daria - that 90s show on MTV 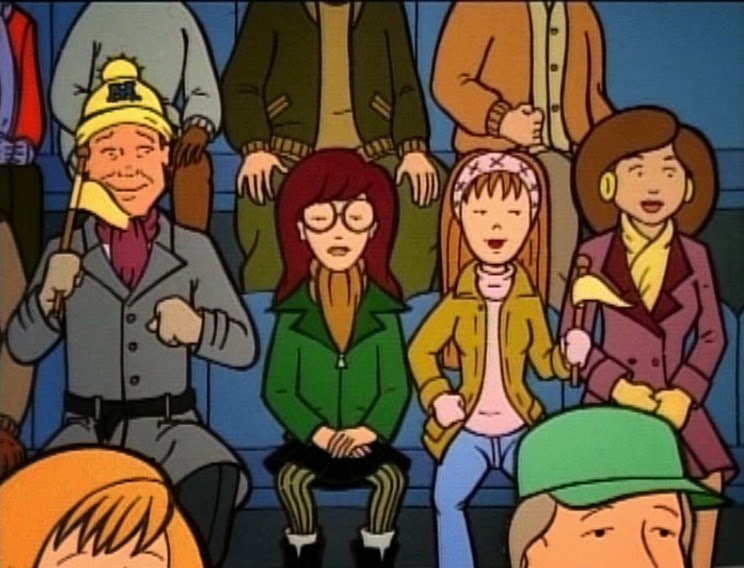 Beavis and Butthead were so successful that they were able to generate spin offs.  Spin offs are an old sit com practice that happens every so often with smash hit shows.

In this case, a snack bar character from Beavis and Butthead's universe got her own television series - Daria.  Daria was a non-conformist high school misfit with a superior intellect, yet glazed with a punk rock theme.  Daria was the 90s version of Molly Ringwald with pent up teenage angst.  The other Beavis and Butthead spinoff television show was from the opposite political pole - King of the Hill.  In the introductory sequence we see Daria with her family and her sister and father are waving a yellow pennants. 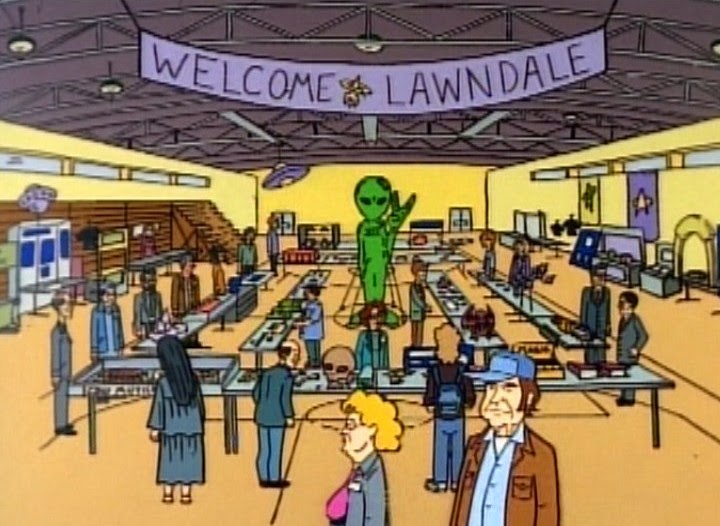 Later in the pilot episode, Daria's family visits a UFO convention.  Of vexillological note is a "Welcome Lawndale" banner hanging above the centerpiece fake green alien.  Also along the right side of the wall are what look like two Star Trek flags.  One is purple with a yellow Star Trek symbol while the other is yellow and it is harder to make out its emblem.

Posted by Maddish at 8:22 PM No comments: 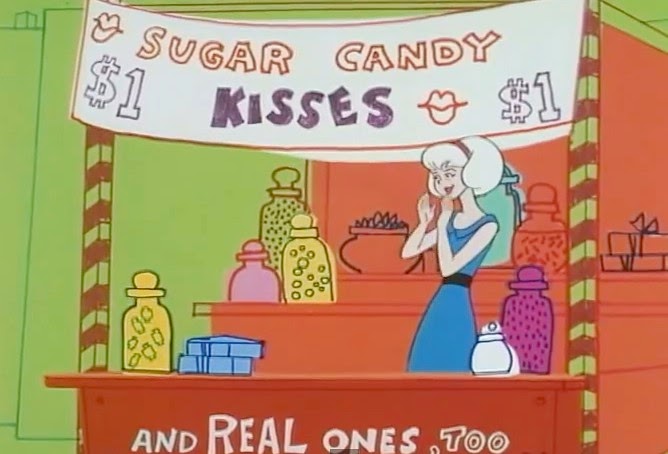 A banner announcing kisses appears in the 1969 video Sugar Sugar by The Archies. It offers kisses for only one dollar.  Additionally the both is decorated with red striped streamers that give it a candy cane look. 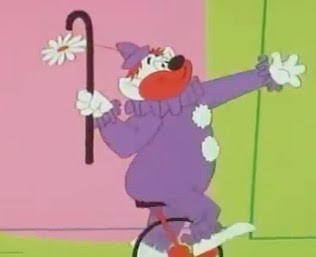 Note if you have lost the sense of taste or have no idea what sweetness tastes like, then this song puts it perfectly in a musical analog.

A vexilloid appears when the dog becomes a clown.

If there is any song in desperate need of a wedding group dance, it is this one.
Posted by Maddish at 7:58 PM No comments: Like the sail of a ship, the logo on the bass drum is a vexillological badge that marks the presence of a band.